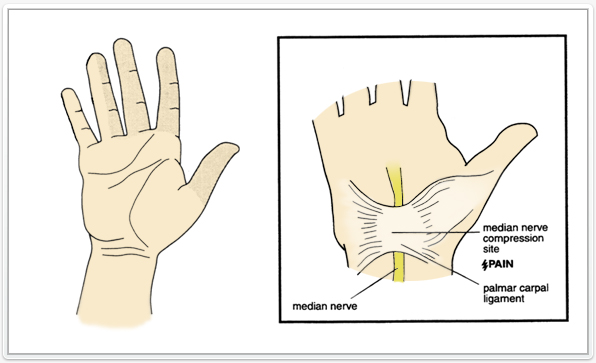 The term “carpal” is Latin for hand.  Literally interpreted, carpal tunnel syndrome means hand tunnel syndrome.  In terms of causality, the most important word is the middle word – tunnel.  Any tunnel, whether it be a tunnel in the human body, a ground hog tunnel or a tunnel for motor vehicles has a fixed amount of space.  Every tunnel has a limited amount of space.  Therefore, carpal tunnel syndrome is four times more common in women than men.  The reason for this is that, in general, women have smaller hands than men.  Hence, women have smaller hand tunnels than men. For the same reason, the #1 risk factor for carpal tunnel syndrome as consistent with our professional medical experience and training, as well as the scientific medical literature, particularly in the past 25 years, is obesity.  It is quite common for a woman to graduate from high school weighing 120 to 140 pounds.  Years later, women in their 40s and 50s weighing 200 or more pounds, with numbness and tingling in their hands almost always are proven to have developed carpal tunnel syndrome.  The additional adipose and soft tissues deposited in the hand tunnel associated with obesity shrinks the size of the tunnel as the hand bones do not grow beyond puberty to account for the increase in body mass index. In considering the above, the “bread and butter” case for carpal tunnel syndrome is an obese woman in her early 40s of short stature (and therefore small hands). The symptoms of carpal tunnel syndrome include numbness and tingling in all digits of the hand but more often more noticeable in the thumb, index finger and long finger, pain on the palm side of the wrist, an aching pain in the thumb pad and loss of grip strength.  A common additional symptom for carpal tunnel syndrome is hand numbness and tingling waking a person up at nighttime.  This is due to the fact that people fall asleep with their wrist flexed (doubles the carpal pressure) or extended (triples the carpal pressure) which results in deprivation of blood flow to an injured nerve which results in symptoms within the median nerve (carpal tunnel nerve) distribution.

The most common causal factors for carpal tunnel syndrome in our professional medical experience as well as the scientific medical literature include the following:

The carpal tunnel is a space-confining issue and the additional adipose and soft tissues deposited within the tunnel compromise the carpal tunnel space and compress the median nerve.

The majority of carpal tunnel syndrome cases occur in individuals in their 40s and 50s with a peak incidence of life in the early 40s.  This is also viewed as many individuals have an elevated body mass index by this time in their life in comparison to their teenage years and 20s.

A low thyroid condition meaning that there is a low metabolism often is associated with weight gain.  An elevated body mass index/obesity is the #1 risk factor for carpal tunnel syndrome.

Diabetes most commonly occurs in an obese individual so this may be viewed as another way of saying the same thing, namely that obesity is the #1 cause of carpal tunnel syndrome.  On a separate pathophysiologic basis, diabetes is noted to cause a microvasculitis.  It adversely affects the small blood vessels.  Some of the small blood vessels adversely affected go to the median nerve and contribute to carpal tunnel syndrome.  Diabetics are more prone to developing entrapment neuropathies at the wrist, elbow and knee.

A person with a peripheral nerve disease process, from such entities as diabetes, alcoholism, chemotherapy, vitamin B deficiency, or otherwise, is more predisposed to developing entrapment neuropathies, including but not limited to carpal tunnel syndrome.

Inflammation of the bones at the joint of the wrist can compromise the carpal tunnel space.  Therefore, this form of arthritis which is known for adversely affecting the wrist joint can directly lead to carpal tunnel syndrome.

By similar way of the diabetic mechanism of injury, high cholesterol contributes to plaque formation in arteries and arterials which compromises blood supply which eventually can also adversely affect peripheral nerves, including the median nerve, known as the carpal tunnel nerve.